Sales of Maruti Suzuki fell by 29.00% in the Commercial Vehicles sales report in August 2022.

The commercial vehicle sales data has been released by FADA( Federation of Automobiles Dealers), which states growth of 24.12% of overall sales. The total sales of the CV segment touched 67,158 units this August 2022, whereas  in August 2021 the brands sold a total of 54,107 units. Tata Motors remained at the top of the sales chart yet again, while SML Isuzu took a giant leap in its sales with an 81.85% rise.

Speaking on the commercial vehicles sales figure 2022 August, Mr Manish Raj Singhania said, "The CV segment continues to witness an upswing in economic activities post monsoon and saw a growth of 24% YoY. This along with the government's infrastructure push, new launches by OEMs and better conversion in fleet operations has kept the segment in the green. Apart from this, the Passenger Carrier segment is also showing good demand due to increased buying from Educational Institutions."

Brand-Wise Commercial Vehicles Sales Data
Most of the companies experienced remarkable growth in commercial vehicle sales in India in August 2022, while some could not touch the figures of the same month last year. So let's check out the brand-wise sales data of commercial vehicles. 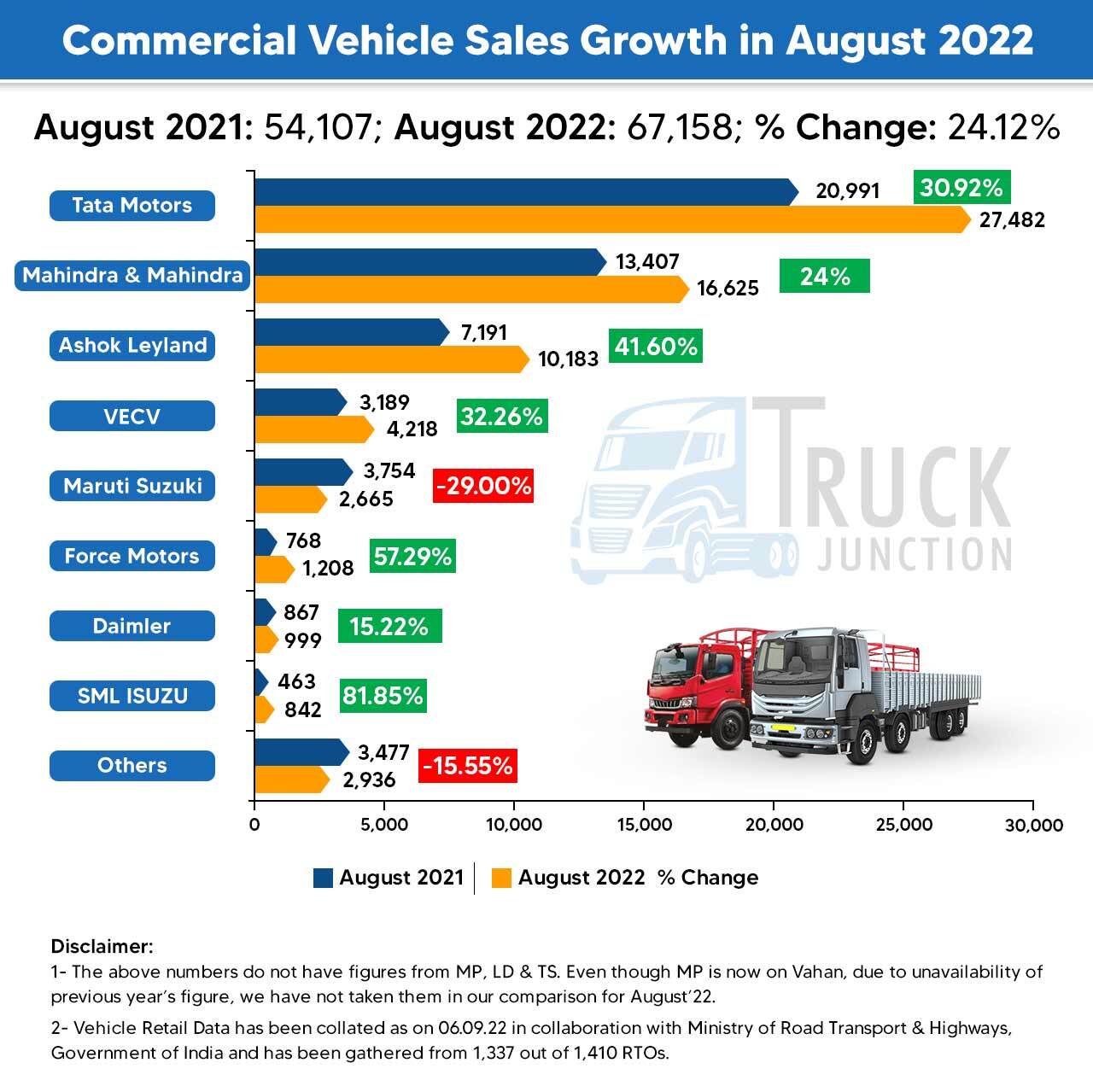 Mahindra & Mahindra
The top performers of the SCV segment again experienced an excellent performance. Mahindra & Mahindra raised its sales by 24% in August 2022; according to FADA, with 16,625 units, the brand stayed in second place.

Ashok Leyland
The flagship company of the Hinduja Group, Ashok Leyland, registered a growth of 41.60%. The company closed its sales with 10,183 sold units which were 7,191 units in August 2021.

VECV
The combined unit of Volvo and Eicher Motors, VECV, ended last month on a good note with 32.26% upward growth in its sales. FADA sales statistics of VECV show that the company sold 4,218 commercial vehicles, which were 3,189 units in the previous month.

Force Motors
Force Motors created good sales in August this year. The brand sold 1,208 units in August 2022, an increase of 57.29% against the 768 units of August last year.

Daimler
The Daimler group manufactures commercial vehicles in India as BharatBenz trucks. In August 2022, the company sold 999 units and increased the YoY sales by 15.22%, as the units sold last year were 867.

SML ISUZU
SML ISUZU created a significant giant increase in sales in August of 2022. The sales of this company increased by 81.85% as they sold 842 units in the FADA commercial sales report of August 2022. SML Isuzu sold 463 units last year in August.

Are you a Business Owner?