Electric Three Wheelers Experienced A Growth Of 1100% In May 2022

YoY Information:- The Electric three-wheelers sector jumped 1099.63%, close to 1100.00% in the YoY sales numbers. Y.C Electric, Mayuri and Citylife came up as the key players in the market and sold 2045, 1367, and 1019 units, respectively. As we all know, last year, the market was fighting the pandemic and sales were disrupted. But after one year, the market has started blooming again, and customers are returning. 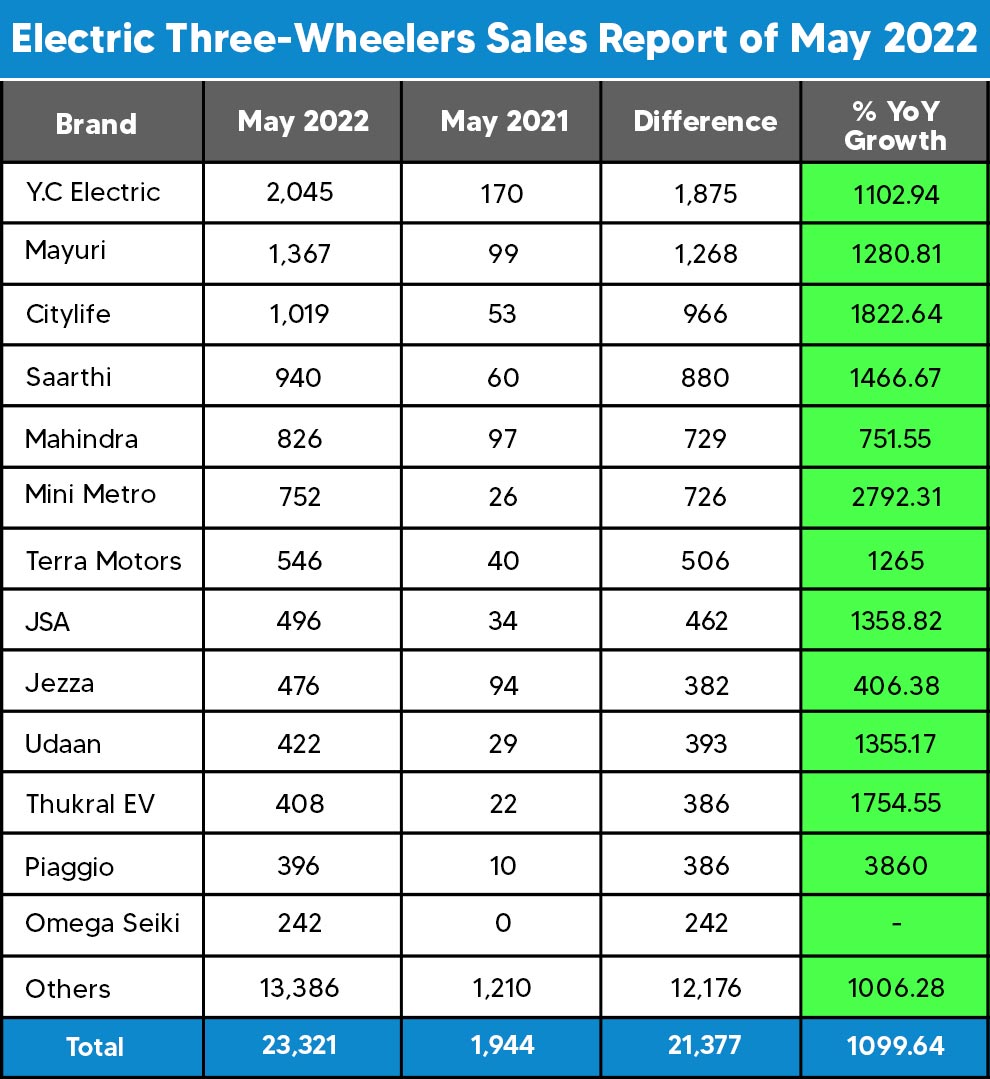 All the companies experienced positive signs in their YoY sales numbers and gained a good margin.

MoM Information:- As the numbers of the industry also experienced good MoM sales growth of 10.77%. All the companies except Piaggio recorded a nominal growth in the data. JSA, CityLife and Mini Metro stayed at the top and gained 25.57%, 25.34% and 17.87% respectively. Piaggio went on the backfoot and recorded a decrease of 30% in sales; apart from that, overall sales were good. 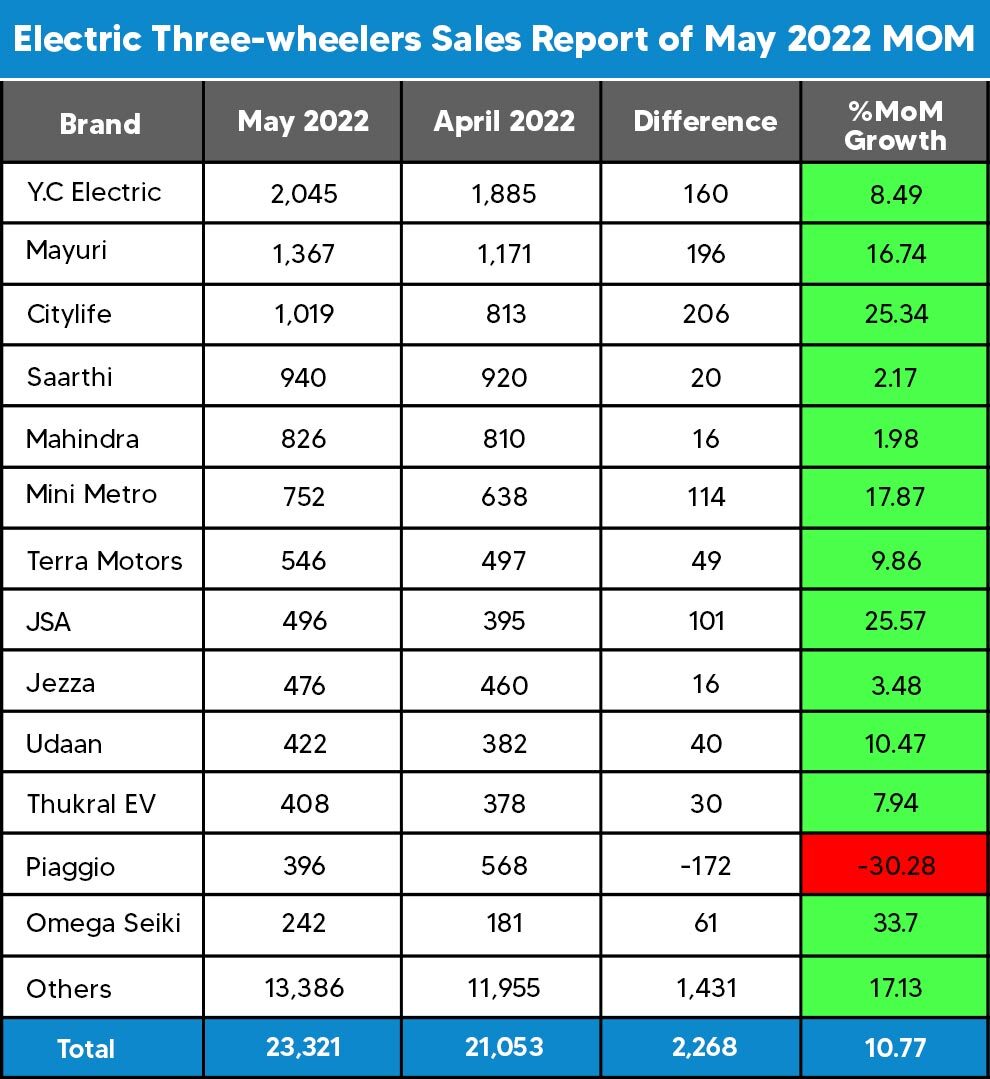 The MoM sales of May '22 and April '22 shows that the Electric three-wheelers sector is increasing quickly.

Y.C. Electric
Y.C. Electric played a significant role in the growth of Electric Three-wheelers this year. The company sold 2045 units in May '22, increasing 1099% from 170 units sold in May last year. The MoM sales also went up by 8.49%.

Mayuri
Mayuri stayed second in the league and sold 1367 units of the vehicle this May; the sales numbers of Mayuri increased by 1280. 81%. Last year the company fell short by one unit to hit the 100 mark and stayed at 99. The company also experienced growth in MoM sales by 16.74%.

City Life
DILLI Electric or Citylife is the last company this May which crossed the mark of selling 1000 vehicles. Nevertheless, the industry sold 1019 units of three-wheelers in May '22 and outnumbered its own sales figure of 53 units by the massive growth of 1822.64%.

Saarthi
Saarthi Industry is famous for the passenger vehicle segment, selling 940 units of electric three-wheelers this year while they sold 60 units last year. The company grew the selling number by 1466.67% in one year. MoM sales also increased by 2.17%.

Mahindra
Mahindra Electric Mobility sold 826 units and experienced an increase of 751.55% compared to the 97 units last May '21. The numbers also grew by close to 2% in the MoM sales.

Mini Metro
The sales numbers of Mini Metro show the customers' belief in them; the company sold 752 units in May '22, increasing 2792.31% from last year's sales of 26 units. The monthly sales also increased by 17.87%.

J.S. Auto
The JSA company recorded good growth in their sales in May '22 by 1358.82%. The company sold 496 units this year, while last year, which went into the pandemic, the company sold only 34 units. As a result, JSA registered a growth of 25.57% MoM growth.

Jezza Motors(Vani)
Jezza Motors, the parent company of Vani Motors, sold 476 units and experienced significant growth of 406.38%. The MoM sales of the company also increased by 3.48%.

Udaan
Udaan or Energy Electric has made a considerable jump in sales this May. The company sold 422 units, increasing 393% from the 29 units of last year. The company also recorded a 10.47% growth in MoM sales.

Thukral EV
Thukral EV company got the customers' belief back and recorded an upward growth of 1754.55% in its sales. The company sold 22 units in May '21, which went under pandemic and sold 408 units in May '22; it shows that the market is getting back on track again.

Piaggio
The company which grew the most in sales number was Piaggio. Last year they sold only 10 units of Piaggio, but this year the numbers were different, recording a growth of 3860%. Piaggio sold 386 units, even though the MoM sales fell by 30.28%.

Omega Seiki
Omega Seiki is one of the newest companies in the Electric Three-wheelers segment, but the company has been famous from the start of its product. Not existing till May '21, the company sold 242 vehicles in May '22 and also showed a growth of 33.7% in MoM sales.

The other manufacturers also experienced a rise in their sales numbers and contributed heavily to the overall sales with 13,386 units.


Are you looking to buy or sell a new truck or a used truck, get a truck loan, Select your truck according to category and other facilities Truck Junction with just one click and download the Truck Junction Mobile Application to know the latest news related to the truck industry.