The electric 3-wheeler market is like a low hanging fruit of the EV industry in India. In the first 6 months of the current financial year, the segment has witnessed sales of 7,401 units, a 510% year-on-year growth (April-September 2020: 1,213 units).

High prices of petrol and diesel and huge demand for last-mile delivery across the country from the booming e-commerce industry are helping to drive the growth in the electric three-wheeler market.

Mahindra Electric has two products which include Treo Passenger and Cargo Carrier, and Alfa Passenger Carrier. Both accounted for 4,927 units of total e-three-wheeler sales in the first half of FY 2022. While the company captures 66% of the market by this number, the cumulative Treo sales of 3,303 units make them occupy 44.62% of the market. The Mahindra Treo Passenger Carrier contributed 2,165 units, and Treo Zor Cargo Carrier contributed 1,138 units. Since 2018, the Mahindra Treo brand has sold over 10,000 units in India and is the largest selling lithium-ion electric auto.

Mahindra Electric launched the passenger-carrying Treo three-wheeler on October 29, 2020, known as Treo Zor. It is available at Rs 273,000 (ex-showroom Delhi, net of FAME 2 and state subsidy). TreoZor comes in 3 variants - Pickup, Delivery Van and Flatbed. Regarding this electric 3 wheeler, Mahindra Electric claims that the Treozor offers "an excellent value proposition to its owners" in the form of high savings of over Rs 60,000 per annum over existing diesel cargo three-wheelers, which is a result of its maintenance cost of just 40 paise/km. The TreoZor develops 8kW and makes 42Nm of best-in-class torque. The Treo Zor also comes with a claimed best-in-class payload of 550kg.

The No. 1 electric cargo carrier is Piaggio Vehicle's Ape Xtra with 1,373 units. The Ape E-Extra FX develops a maximum power of 9.5 kW and comes with a full metal body architecture and six feet cargo deck length. It is customizable for many applications such as delivery vans and garbage collection, among other uses. The company is rapidly implementing its retail network expansion program and opened a new experience centre in Mumbai on October 26. And two weeks before that, it launched all 12 showrooms in Bihar, a state where the company is seeing strong traction for its electric three-wheelers. 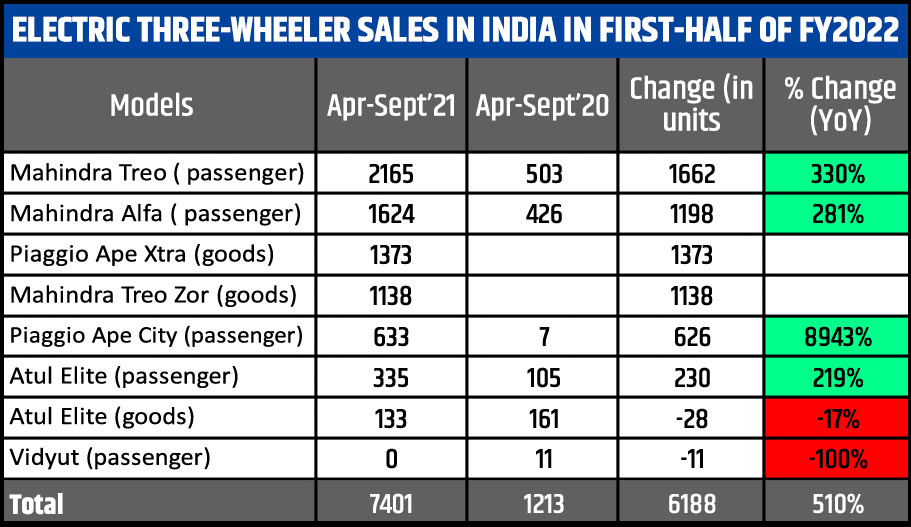 Seeing the huge market potential, Piaggio has recently partnered with global energy major BP to develop and roll out a wide set of services for the rapidly growing number of two- and three-wheeled electric vehicles in Europe, India and Asia. Under their MoU, BP, Piaggio Group, alongside partner Jio-bp in India, will offer charging and battery trade stations, just as fostering comprehensive administrations, for example, 'Battery as a Service' (BaaS) – renting, the executives and vehicle batteries recycle – and 'Vehicle as a Service' (VaaS) – renting, support, maintenance and keen energy the board of these vehicles. Beginning endeavors and spotlight will be on India, where Jio-bp and Piaggio are as of now occupied with creating EV solutions.

In the face of high diesel and petrol prices and an urgent need for faster last-mile deliveries, the electric three-wheeler cargo carrier segment has registered a YOY growth of 1,542% to 2,644 units in H1 FY2022 from a low-base of just 161 units in H1 FY2021. It is also reflected in the increasing share of EVs in the overall three-wheeler segment, which saw sales of 32,198 units: up 8.21% from just 0.62% a year ago.

With several growth tailwinds for this mobility segment, things can only get better for the electric three-wheeler industry.

Are you looking to buy or sell a new truck or a used truck, get a truck loan and other facilities at Truck Junction with just one click and download the Truck Junction Mobile Application to know the latest news related to the truck industry.

Ashok Leyland to Slash Carbon Emissions by 60 per cent

Euler Motors Gets Order For 1,000 Units From MoEVing